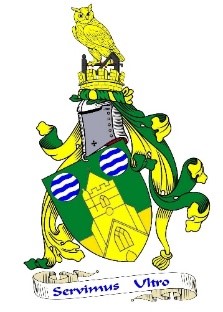 Wrockwardine Parish Council was gifted this coat of arms by a former Clerk to the Council when he retired after nineteen years of employment in December 2018.

"Vert, issuing from base a Saxon church Or and, in chief two fountains thereon a helmet with mantling. Vert doubled with Or and on a wreath of the liveries is set a crest issuing from a mural coronet, an owl of Or perched upon a gate sable and, in an escrol below the achievement this motto: 'Servimus Ultro'". (Designed by Martin S.J Goldstraw Dec 2018)

The livery colours are 'vert' (green) and 'or' (gold). The green of the shield represents the rural nature of the Parish, it being one of the largest Parishes in terms of hectares, in the Borough. Although most of the population lives in Admaston and Bratton and is urban in nature, the greater area of the Parish lies in the rural villages and hamlets. The church represents the Church of St peter in Wrockwardine, which is of Saxon origin. The two roundels made up of 'azure' (blue) and 'argent' (white) wavy bars are known in heraldic terms as "fountains" and these represent the Spa at Admaston and the holy well in Wrockwardine. During the 19th Century, Admaston was a commercial spa with several springs containing chalybeate, calcium chloride, selenite and sea salt. There is also a reference to a medieval holy well in Wrockwardine, in whose manor Admaston would then have been situated and, it was known for providing the purest water available in the Wellington District.

It would have been impossible and impractical to represent every village and hamlet in the Parish in this coat of arms which, by its nature, requires a simple and easily recognisable design. However, the crest can be taken to allude to several things which represent the Parish. The mural crown, which is a common feature in many civic arms, is said to represent the town walls and defences and here it represents both the Parish in a civic context and also the present urban or townlike nature of Admaston. The Parish is one of the many border Parishes in the Borough and so the gate is representative of the many gateways into the Borough of Telford & Wrekin, some of them busy and important routes. Perched upon the gate is an owl which represents the rural nature of most of the Parish, but also alludes to the duties and responsibilities of those elected to office; a need to be ever vigilant and to make decisions wisely.

The Latin motto, "Servimus Ultro" (For the Server) can be literally translated as "Servimus", who serve and, "Ultro", volunteering or voluntary and can therefore be paraphrased as those who serve are volunteers or, service by volunteers or simply, voluntary service. This of course refers to the elected Members of the Parish Council who give their time generously and without remuneration.